Alan and I spent an hour this morning tidying up the phone box. We cleaned all the windows inside and out, brushed down the outside, and swept out the inside.

We also binned some bits and bobs from past exhibitions which have collected under the table and sorted out what needs to remain in there.

Another part of today's exercise was to shift all the stuff from the restoration that had accumulated in our houses and garages back into the kiosk. The original box that was bolted to the back which house the phone and the money box has been put in the kiosk under the table. A couple of spare small unrestored glazing frames and both the paint tins are better stored in the kiosk than in Alan's garage. 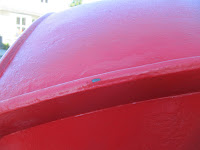 Close inspection of the kiosk showed a couple of chips in the roof which will need addressing before things get any worse. I suppose that seeing as it has been eighteen months since it was painted, it has held up fairly well.

The ivy growing over the adjacent wall is beginning to encroach on the outside of the kiosk, we'll cut that back before it becomes a nightmare trying to remove.

Finally, we continued our Remembrance exhibition from last year with another two biographies from the first and second world wars.
Posted by Kevin at 12:03 4 comments: