Is that red or RED? 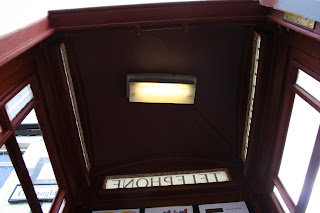 Yesterday, I started at half seven in the morning as I knew the weather was going to be poor and it was essential that the red oxide was completed if we were to start painting the kiosk in the final red.

The rain started about nine o'clock and I had completed the ceiling (as the photo shows), and was forced to leave the remaining areas inside the kiosk.

I also picked up all the glass from Glassmaster.

Today, and a lot of activity, starting this morning with completing the red oxide inside. The weather then turned and I abandoned in the hope that we would be able to continue this afternoon. Around half two, we were able to start applying the first coat of paint. As it makes sense to work from the top down, we initially painted the white ceiling. The rest of the inside was left as we need to give the white and the red oxide time to go off. 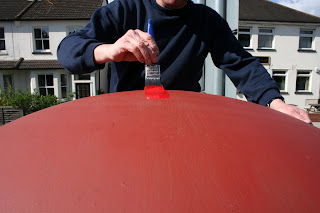 We then moved on to the outside and the picture here shows Alan applying the very first brush stroke of red 539 paint. This was an extremely satisfying moment which we celebrated with a pint from the Club. Our intention was to paint the roof and the top of the kiosk where the crowns are. This is to ensure that we get time to apply the second coat and it has time to harden ready for Roy from Allsigns to do the gold leaf. 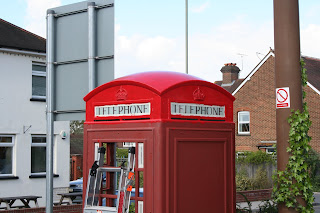 Alan had the exciting job of applying the paint while I used up almost an entire roll of masking tape, taping up the windows all round. This took over an hour and I then picked up a paint brush and we carried on painting the third side and the door. 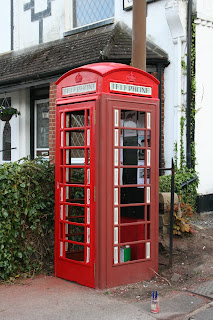 By the time we finished at half six tonight, we had completed the dome and four crowns, the door inside and out, and the outside of the third side. It is difficult to explain just how satisfying today was. Over four months of very hard work and it has finally begun to take shape. It was also quite amazing just how many people stopped and spoke with us today. I'm grateful to the local resident for a nice cup of tea when I was quite cold this morning.
Finally, I hope we are not blamed for the minor car accident which took place outside the club, I think the driver was probably looking at the 'phone box when he hit the guy in front.
Posted by Kevin at 19:42