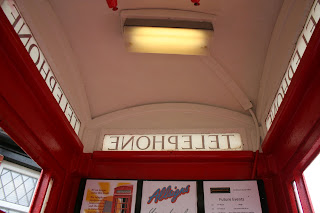 Great progress today, we started before seven this morning, with Alan finishing off the painting of the glazing frames. We then headed down to the kiosk. We painted the ceiling first which now looks absolutely fantastic. I think it will look really good when dark, as the light will reflect nicely off the ceiling and the white posters. The inside is now painted as the kiosks were originally designed.

We then moved on to painting the rest of the kiosk. The kiosk has now had two complete coats. It takes on an extraordinary sheen when the Sun glistens on it.

As we were painting, an elderly resident hurrying past, stopped for a chat, and she told us she remembered calling her boyfriends from the kiosk when she was a teenager. She came to the village in 1938, and remembers the kiosk being there then. This means this would have been one of the early K6 kiosks to be installed in the country as the K6 was made to commemorate the silver jubilee of King George V in 1935. A fascinating addition to the history of our kiosk.

During the course of the afternoon, we started glazing the west side. We glazed the missing four small panes, and glazed four of the large panes. A couple of the glazing frames have required a slight bit of filing where the brass pins drop in. We'll document the process of fitting the glass in the next blog entry.

All in all, an extremely satisfying day in the office. I think we'll ask for a pay rise!
Posted by Kevin at 21:01