Windy and cold today. I had aimed to finish off the inside of the door today, but it was essential that I at least primed the mahogany door surround inside as the weather looks poor for the weekend. I'm off camping with the Explorer Scouts, so it is unlikely anything would get done directly on the kiosk over the weekend. With there being no glass, and the rain generally coming from a westerly direction, the inside of the door gets a right soaking when it rains. I did achieve that, but it was not without drama.
Anyone watching would have tutted at me trying to paint with the wind blowing as it was. The ladder went flying, slightly too much paint on the brush caused the excess to fly off (landing on my coat at one point which required emergency action), and finally specks of previously scraped paint blowing round and sticking to the freshly primed wood. However, I'm not too bothered at the occasional speck of paint, as we'll rub the door down again, prior to applying another coat of primer, so minor problems now will be resolved. The priority was to ensure the wood was protected, which has been achieved. Before and after photos: 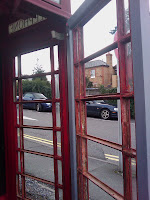 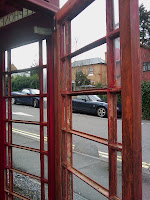 Next week, we'll start the nightmare third side, although I'm working most of next week (at my proper job), so won't be able to dedicate much time to the kiosk. Talking of real work, a chap in a van pulled alongside the kiosk the other day when I was working in the pouring rain and sarcastically said 'You must love your job'. When I replied that I was a volunteer and restoring the kiosk for the village, he shook his head and informed me that I must be off mine! I'm beginning to wonder...

Still on target for a mid May completion.
Posted by Kevin at 13:55