Fresh from my trip to Scotland touring Scottish Telephone Boxes (only kidding), I got stuck in to removing the damaged post left by the vandals a couple of weeks ago. I was concerned that if someone fell on it, it had the potential to cause a serious injury which would mean 'elf & safety would crawl round the kiosk for evermore. 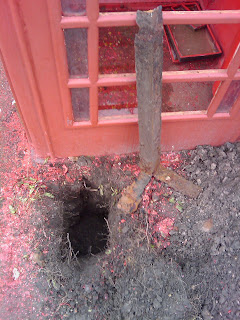 We initially thought the posts were concreted in, as they were solid. However there was a miniscule amount of movement to the post when forced, which gave us the impression they may not be. Having dug a pit this morning, I can confirm that they are not concreted in. Approximately 18 inches down the post has a couple of six inch feet extending out at 90 degrees. I've not seen this before, and can only assume that when things were done properly many years ago, an engineering solution was used rather than just encasing something in concrete. It does raise the question of whether we should go to elaborate lengths to put the posts back in the same way or whether we just bung concrete round them. I'll bottom this one out with Alan later. It would be nice to complete the job in the most original way, but if it is buried 18 inches below the ground, and the only people who will ever know are those that dig the posts up in 50 years time, is it worth it? The attached picture shows the post, but frustratingly doesn't really show the size or depth of the hole very well (it was hard work and I worked up a sweat getting that out).
Today I also decided to remove some of the ivy from the wall round by the third side (we have sought permission from the house owner). I would have scraped some of the paint off that third side, but it started raining so I worked inside instead. I decided to scrape the paint from the door with a view to priming the inside of the door this coming weekend. When the weather improves, I'll try to get that third side done.

Ben Huddart, a local plumber and a member of Brookwood Social Club has agreed to sponsor maintenance of the kiosk by displaying a poster advertising his services. This is now inside the kiosk. There remains one space left if I remember correctly with Allsigns, Baker's Dozen, Ben Huddart, Brookwood Social Club,  Fulk Bros & Glassmaster all agreeing to display posters inside the kiosk.
I bumped into Kath Brooks (who is a keen supporter of the kiosk), and we were discussing the railings and the patch of dirt where the railings were placed. We are looking at options for that tiny patch of land. I was initially thinking of concreting it over when we put the railings back. Kath was suggesting that perhaps a small flower bed could be laid. We'll bat ideas around over the next few weeks and try to come up with something the village supports. If you have a view, please let me know.
I have been thinking for a while about how to prevent vandalism, and it occurred to me that getting young people involved with the kiosk may be the way. If they are involved somehow, then perhaps they would develop some respect for the kiosk and not smash the windows in years to come. Maybe this is a bit of an idealistic view and totally out of touch with reality. However having spoken with Glynis Preshaw this morning, we are going to contact Mrs Green at Brookwood School and see if the school would like to get involved somehow. Glynis and I thought that maybe some art work produced by the pupils could be displayed on a rotational basis. We'll run with the idea and see what happens.
Posted by Kevin at 14:31