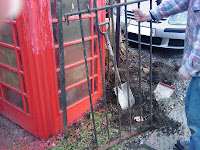 Today we started looking at the railings which protect two sides of the kiosk. As usual when metal is neglected over several decades, stuff rusts away. Our railings are no exception. The nuts and bolts were solid and needed severe persuasion to move. In fact three were cut off, and one had rusted through to the point where we were able to knock the bolt out with a hammer. Alan has taken the set of railings out and we'll refurbish them. 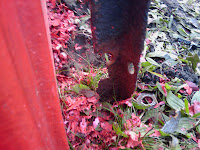 As can be seen from the attached picture, the posts have rotted through and they present a different problem. They are concreted in and we don't want to remove them. We are going to look to plating them to provide some additional strength prior to putting the railings back.

Allsigns Woking of Brookwood have provided us with a poster to put in the kiosk. Allsigns have agreed to sponsor the maintenance of the kiosk as well as providing us with the film to place over one of the panes explaining where the nearest working BT phone is. The text that has been agreed is: "This kiosk is preserved for the village. A working pay phone is located up by the station".

Finally, the sponsor a pane initiative has proved popular with some residents of Brookwood. Of the 24 large panes, nine are now being sponsored by people with a connection to the village. This is fantastic news as the extra money in the kitty will allow us to do a more thorough job on the restoration.